Glenway West, Pond 3 and the phoney land valuation that gives millions to a developer 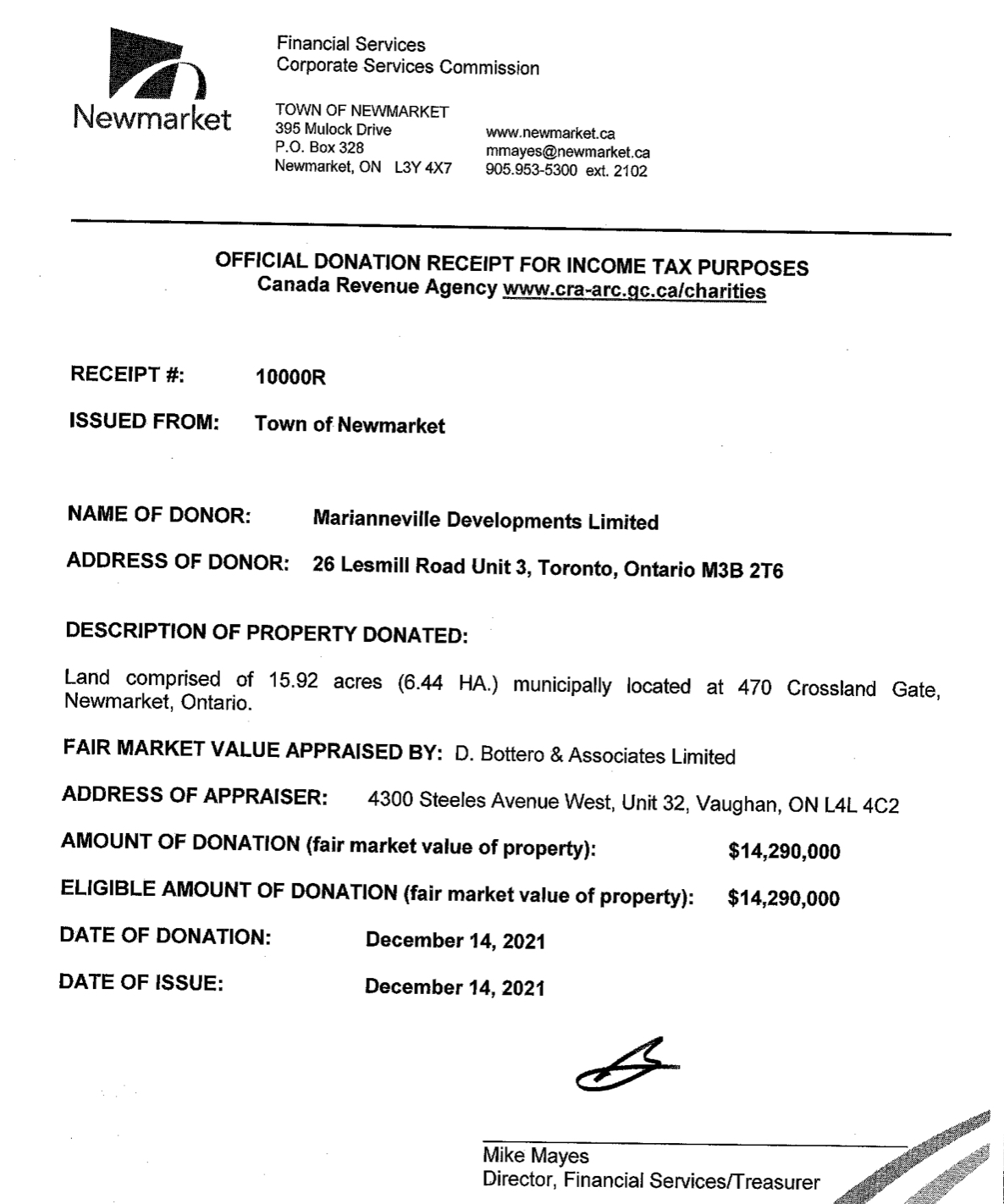 The land was professionally valued but the appraisal is a work of pure fiction.

The valuers landed on their Fair Market Value of $14.2M by making (in their own words) an “extraordinary assumption” that the two stormwater ponds in the donated land could be filled in and the land could be used for a townhouse development.

The Town did not challenge or query this but accepted the valuation report and its conclusions at face value when they were – and are - plainly invalid.

The tax receipt overstates the value of the land.

The “tax receipt” issue was touched upon by Kathryn Morton, a deputant to the Town’s Committee of the Whole on 31 January 2022. She was assured that the issuing of the tax receipt to the developer came at no cost to the Town, direct or indirect. The Chief Financial Officer, Mike Mayes, explained:

“We issued a tax receipt. Actually it is a donation receipt that can be used for tax purposes. The cost was just basically the cost of printing off the piece of paper.”

That is true. But there is, of course, a cost to the Canada Revenue Agency in the shape of foregone revenues. The tax receipt can be used by the developer to offset tax otherwise owing.

Scenario "A": Tomorrow, when councillors are considering giving draft approval for Marianneville’s 189 unit development at Glenway West, Pond 3 will be part of the discussion. The stormwater pond which was included in the 16 acre charitable donation to the Town is an integral – though small – part of the infrastructure supporting the new development. Water will discharge from the development into Pond 3.

Scenario "B": On 14 December 2021, the Town gave a Tax Receipt to the same developer for $14,290,000 in exchange for a "charitable donation" of land. The Town did nothing to test the "extraordinary assumptions" of a warped Valuation Report which concluded that Pond 3 and its sister to the West could be filled-in and the land used for a townhouse development.

So, to be clear, Marianneville’s new Glenway West development will discharge water into the same storm water pond that their own Valuation Report (commissioned jointly with the Town) says should be filled-in and developed for townhouses if at some stage the land is not required for public open space.

The report before councillors says:

Two of these ponds are owned by the developer. They will be reconstructed and conveyed to the Town. Pond 3, as we know, lies in the donated land.

No other stormwater ponds in the Glenway East or West developments have been filled in.

“compatible with the existing physical character of the surrounding neighbourhood”

A stable residential neighbourhood wraps around the donated land on three sides. It is characterised by single detached houses. A townhouse development could not be shoehorned into the eastern two-thirds of the donated land without breaching the principles set out in the Compatibility Interface Plan.

I do not believe for one moment the Town’s Director of Planning or its Director of Engineering would approve a townhouse development sitting on top of two filled-in stormwater ponds.

And I don’t believe the ward councillor, Christina Bisanz, would approve either.

But the Town’s senior management clearly believes the tax receipt comes at no cost to the Town and that's all that matters. If the developer gets undeserved millions through the tax system as the result of an artificially inflated land valuation, then so what?

They will look the other way.

This note added on 3 May 2022: Pond 3 is known as Pond 13 in the Town's Comprehensive Stormwater Management Master Plan (2017). As explained in my earlier post, Pond 13 is a permanent wet pond providing water quantity and quality control. It has a design volume of 9,409 cubic metres. An Olympic size swimming pool holds about 2,500 cubic metres of water. The catchment area of pond 13 is almost 8 acres. Text also updated to make clear that Pond 3 is part of the infrastucture supporting the new development. Ponds 3, of course, lies outside the development itself. 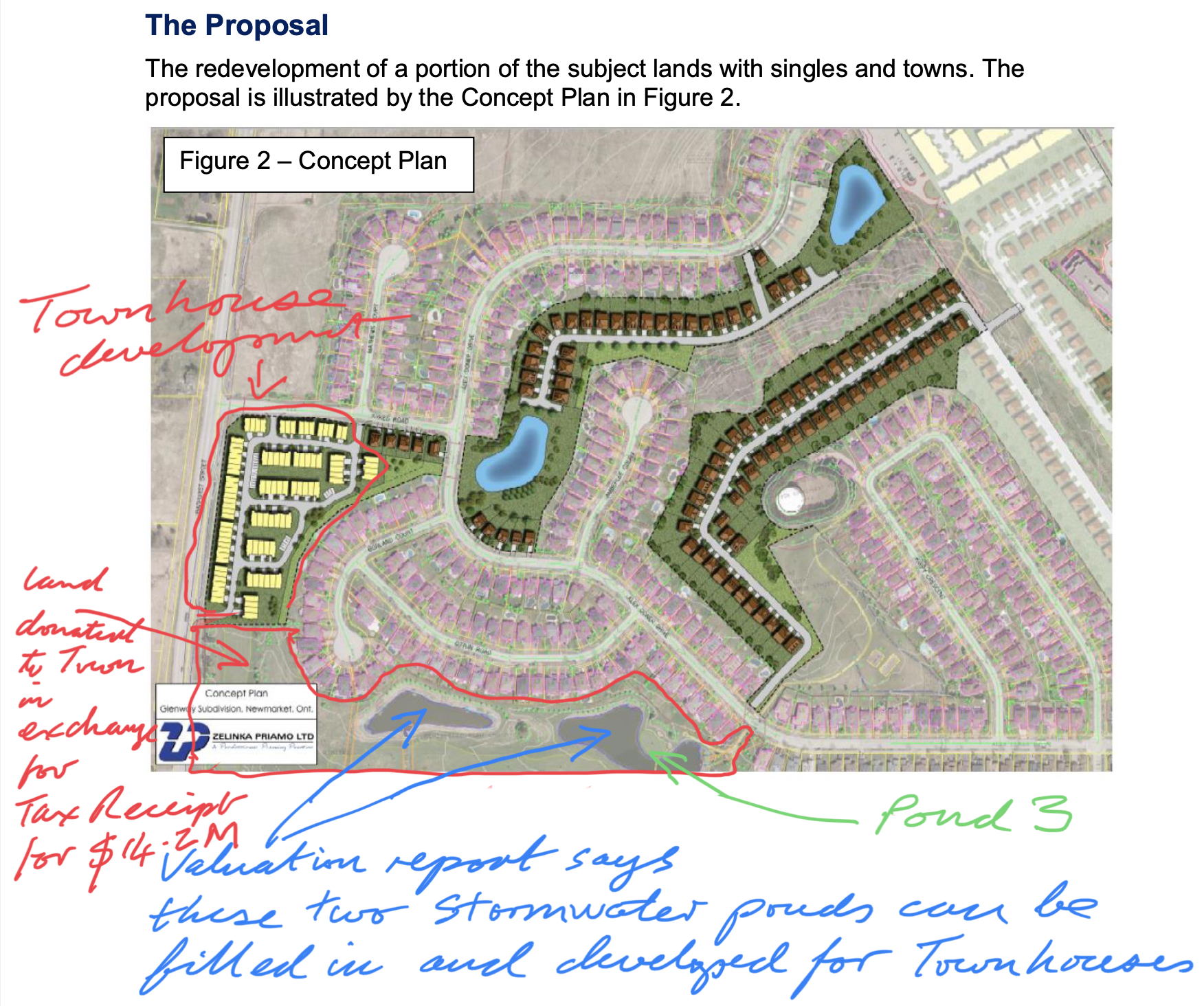