Wolk is a declared candidate for Newmarket Regional Councillor in the October 2014 election.

While conceding “municipal campaign finance reform is needed” he will, nevertheless, “follow the current rules as they are in place right now”.

“Donations for all municipal candidates are public information. I support a provincial discussion on municipal election reform, but will not be accepting a political challenge designed to provide Mr Taylor with an even bigger advantage financially than he already has.”

You can read Darryl Wolk’s views on campaign financing here.

John Taylor says no to campaign cash from developers

Regional Councillor, John Taylor, says he will not accept campaign contributions from developers and hopes all candidates running for election in Newmarket will do the same.

Taylor tells me: “I’ve never taken developer donations. I don’t do it.”

He also stresses that when he accepted a $750 campaign donation from Dwight Slessor Holdings Ltd that was before the Slessors put in their planning application to develop Slessor Square (see blog Developers, Money and Politicians 25 January 2014).

He tells me he had no way of knowing at that stage that the Slessors were planning a huge development on their car lot in Yonge Street, directly opposite Upper Canada Mall.

Fair enough. That is why politicians should hand back campaign contributions from friends, colleagues and supporters who subsequently morph into developers, explaining publicly why the cash is being returned.

Now that John Taylor has made his position crystal clear, I hope that Darryl Wolk, who is challenging Taylor this year, will follow suit. I have written to him and will post his reply here.

There is also a role for the Era Banner.

An editorial calling on candidates of every stripe to reject developers’ money could make the difference.

Bottom Line: Developers should stay out of elections.

We are nine months away from the municipal elections but already candidates are declaring themselves and thinking how they are going to finance their campaigns.

The Mayor of Newmarket, Tony Van Bynen, was quick off the mark, taking a half page ad in the Era Banner on 16 January 2014 telling us he was seeking re-election. (See page 13 here)

Underneath an impressive roll call of supporters we read

“This advertisement was paid for by the Committee to Re-elect Tony Van Bynen.”

Phew! No developers in that list. At least I hope not.

All Council candidates, without exception, must ensure that not a single penny of their campaign spending comes from developers who are planning to build in the town.

Money from developers is tainted. The sums may be modest but the donation comes at a high price.

Professor Robert MacDermid of York University has studied in detail the nexus between developers and politicians both in Toronto and in the GTA and his findings are disconcerting. He explains his concerns here.

Developers don’t help finance everyone running for election. They are not interested in promoting a healthy democracy where all views get an airing. No. They pick and choose, most often supporting those seen as sympathetic or influential, preferably both.

Sometimes they will just back the candidates running for the big jobs.

“At present, the receipt of campaign contributions does not in itself give rise to a conflict of interest for Members when the donor subsequently has a matter before Council or one of its committees.”

Here in Newmarket, the publicly available returns on election expenses show that at the last election Regional Councillor John Taylor received a campaign contribution of $750 from Dwight Slessor Holdings Ltd.

In neither case did the Mayor or John Taylor declare an interest before voting on the Slessor application for the huge development opposite Upper Canada Mall. They were not required to.

In any event, no-one in their right mind would suggest a politician could be bought for a mere $750 (and I am sure Tony Van Bynen and John Taylor could not be bought at any price) but donations –even very modest ones – transmit below-the-radar signals to politicians that the developer is supportive and on-side.

Long before the Slessors made their millions from Slessor Square they were oiling the wheels of local political machines. The Slessors gave the Newmarket Aurora Progressive Conservative Association $1,000 in 2010. And they allowed Frank Klees to use their old car showroom property as his election HQ in the last provincial election (having donated $1,120 to his previous election campaign).

Campaign contributions from developers are not crude bribes. It is altogether more subtle.

The developers’ unstated aim is to build a relationship and foster mutual understanding.

It is in everyone’s interests to have squeaky clean politics in Newmarket and I think, in general, we do. But accepting campaign contributions from people who stand to make millions out of the Town’s planning decisions undermines trust in the system, and in politicians.

Or, at the very least, they should declare an interest.

A last minute revision of plans for the Clock Tower development in Newmarket’s Main Street South will plant a 9 storey condo in the heart of the historic downtown, utterly destroying its character.

The new plans submitted to the Town in the run up to the statutory public meeting on 3 February, and buried in the Town’s website, can be viewed here. For full details go to the planning page and scroll to the Clock Tower proposals. 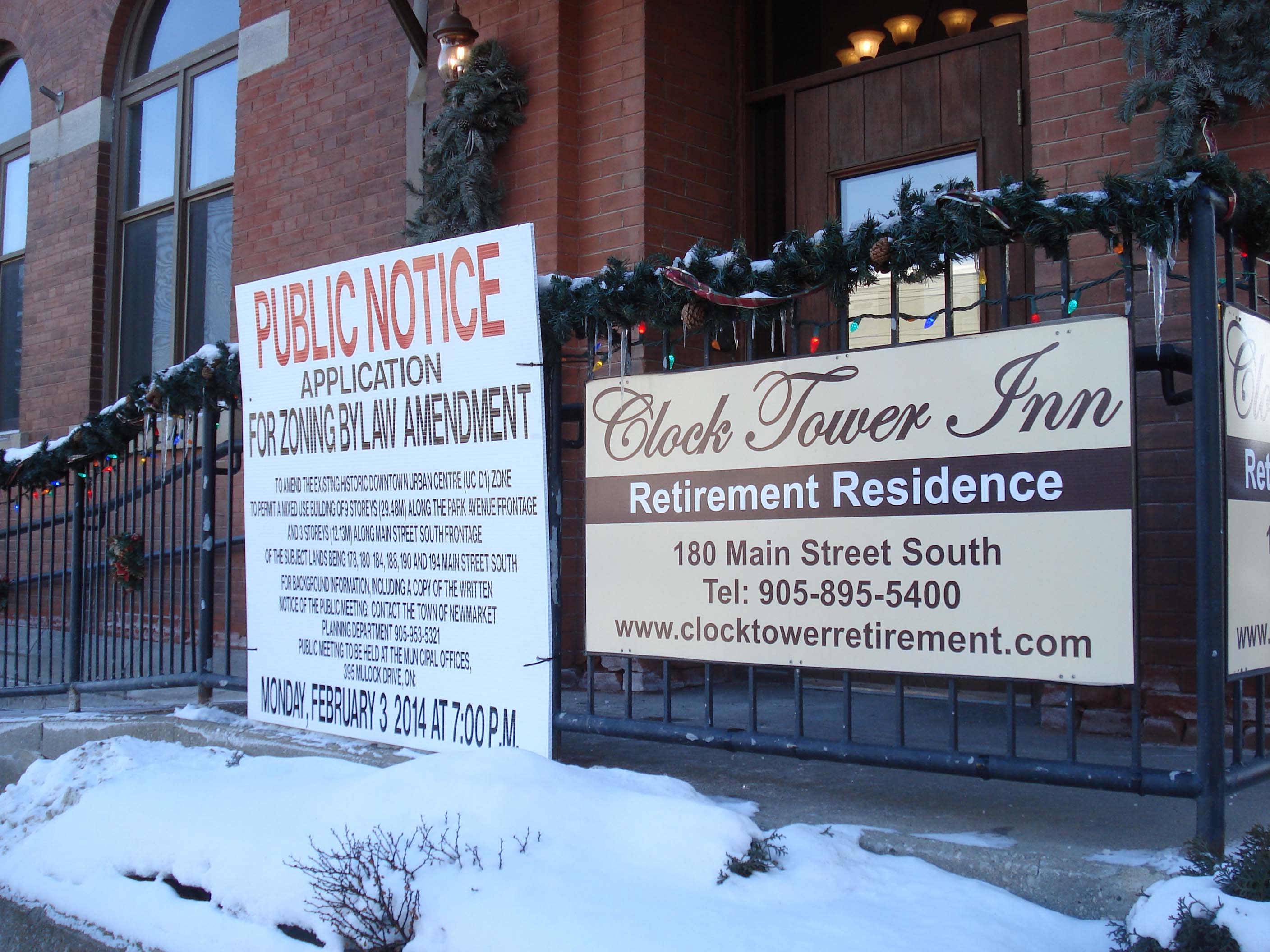 The developers are taking us all for fools.

And a complicit planning system that allows such a destructive proposal to get to this stage is rotten to the core.

The Statutory Public Meeting on the proposed development will be held at 7pm on Monday 3 February in the Council Chamber at Mulock Drive.

The Statutory Public Meeting on the proposed Clock Tower development on Newmarket's historic Main Street will take place at 7pm on Monday 3 February 2014 in the Council Chamber at 395 Mulock Drive.

Anticipating Council approval, the developer, Bob Forrest, issued eviction notices to the tenants of properties adjacent to the Clock Tower whose land is needed for the development. He acquired the properties last year.

The underground car park for the proposed development encroaches on Town owned land.

The development, if given the go-ahead, would involve the demolition of historic commercial buildings, the permanent loss of renowned vistas and sight-lines and the destruction of Newmarket's historic conservation district in Main Street South.

It is the worst kind of speculative development imaginable. It has no redeeming virtues whatsoever.

It is a classic example of the new brutalism in architecture. It is completely out of place in Main Street South. It will ruin the historic skyline and destroy the essence of the neighbourhood in which it is located.

The Town's Heritage Advisory Committee is strongly against the proposed development.