Newmarket Councillors deserve a round of applause for acting decisively to bring developer Bob Forrest to book for ordering the unlawful demolition of one of the Town’s most historic properties smack bang in the heart of the downtown Heritage Conservation District.

That said, Bob Forrest got off lightly. 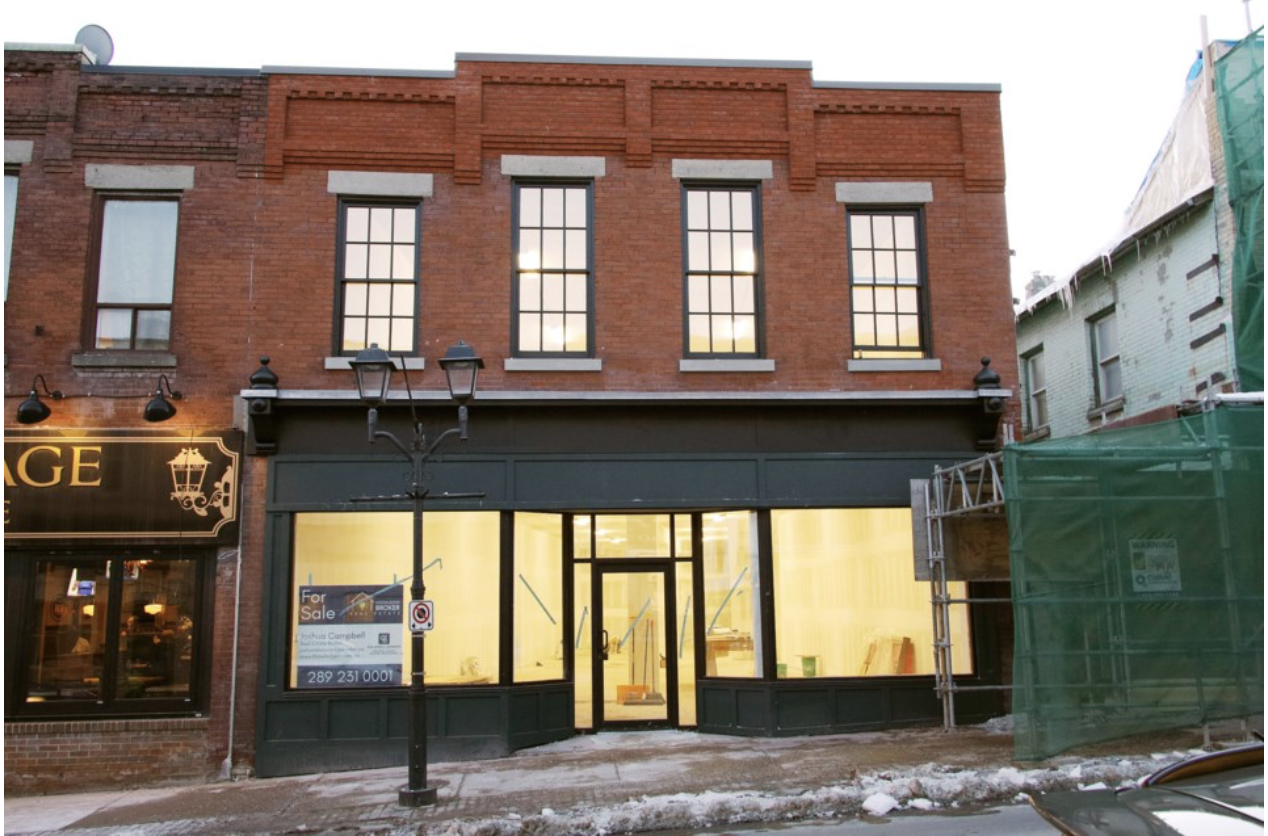 Councillors agreed their negotiating strategy in a closed session meeting of the Council on 2 December 2019 which led to the decision not to prosecute:

“Town staff gathered evidence and information, including speaking with others included in the project, regarding the demolition and undertook a fulsome review and assessment of its recourse options…

“After careful consideration of past penalties imposed by the Courts under the Acts in similar situations that may provide precedent, and the Town’s objective to protect its heritage and continue to move forward with the development and revitalization of Main Street, the Town determined that it was more effective, efficient and would render the best possible achievable outcome to pursue recourse and consequences against Main Street Clock Inc. outside of legal action. Accordingly, rather than pursue prosecution under the Act, the Town sought and achieved a prosecutorial result through an agreement with Main Street Clock Inc. securing both a penalty payment and a full rebuild of the Simpson Building. The rebuild requirements will be registered on title.”

Unfortunately, the report going up to councillors tomorrow (3 February 2020) doesn’t tell the whole story. (Click the link at the bottom of this blog to get to the full report.)

Astonishingly, the narrative does not formally tell us who ordered the demolition (though we know it was Forrest) nor why. The Town pulled its punches in order to get Forrest to agree to settle without going to Court.

“taken down without proper permissions”.

Forrest says that ultimately he was responsible. 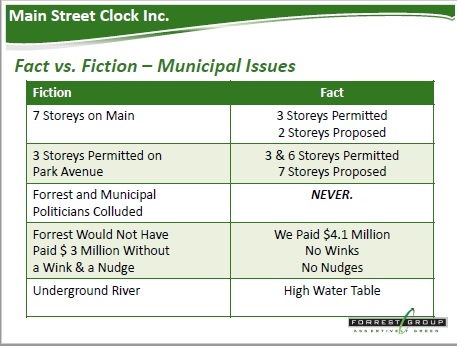 It’s a bit like a dog owner getting caught when his pet poops on a neighbour’s lawn. He didn’t do the deed, of course, but he accepts responsibility.

Cleverly, Forrest has limited the reputational damage to himself personally and to his business but he will still make millions from his project. He bought the Clock Tower (the old Federal Post Office building and the adjacent 1956 telephone exchange) for $2,340,000 in March 2011. It had been on the market for $3,275,000.

Paying off the penalty

In the space of three months the asking price for one of Forrest’s properties had leapt by more than $100,000 – enough to pay off the Town’s penalty.

Forrest has very deep pockets and - even when added to the rebuilding costs of 184 Main Street (put at around $300,000) and the forfeiting of the Town’s grant of $100,000 for doing up the facades - the penalty doesn’t look too painful.

Town staff tell us they reviewed past penalties imposed by the Courts in similar situations. My own survey of Ontario municipalities with Heritage Conservation Districts confirms that what happened here in Newmarket was very, very unusual.

All the elements of a successful prosecution were there. Forrest knew the importance of the property he demolished – he had commissioned a Heritage Impact Assessment on it. He knew his way around the Ontario Heritage Act and he is a developer with decades of experience under his belt. His decision to order the demolition was calculated, not inadvertent.

Of course, if it had gone to Court all sorts of things could have come out in the wash – including the lamentable record of the municipality in protecting its most historic buildings. Forrest’s Main Street properties were allowed to deteriorate and visibly decay over the long years they were left empty.

So, what more is to be done?

I hope the Town will do a “lessons learned” exercise – as it did with Glenway.

Here in Newmarket, which markets itself as an historic destination complete with a huge triumphal arch at Main and Davis telling people they are entering the historic downtown, heritage should be part of the warp and weft of policy making.

It shouldn’t be an afterthought or be left to one “heritage” planner to hold the fort with no oversight. Protecting our heritage is a matter for everyone.

Bob Forrest is probably thanking his good fortune. That he will walk away from the chaos he created, millions in the black.

Photo above right from Newmarket Today.

The Minutes of Settlement between the Town and Forrest's Main Street Clock Inc, dated 17 January 2020, are here.

Update on 4 February 2020: You can watch the Council debate on the settlement at 2.52 into the video. 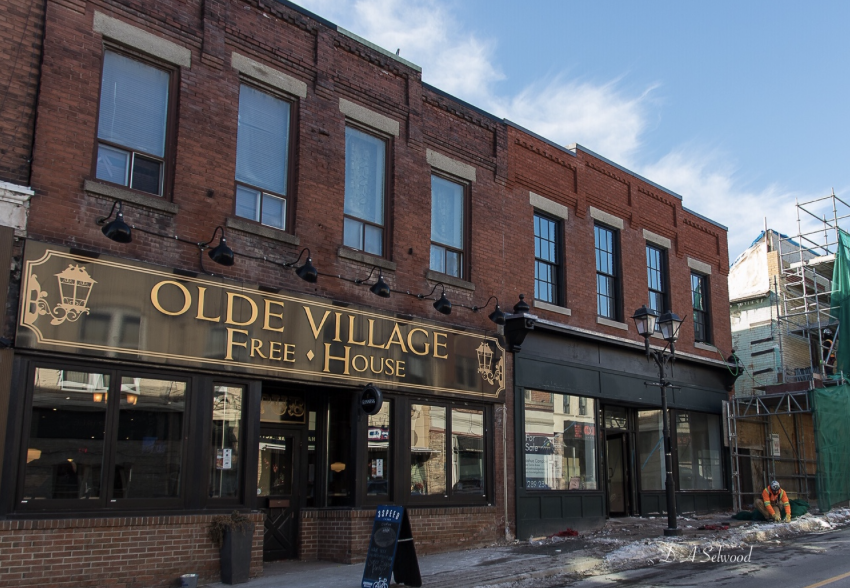 Photo: The restored 194 Main Street South with the pub as its next door neighbour 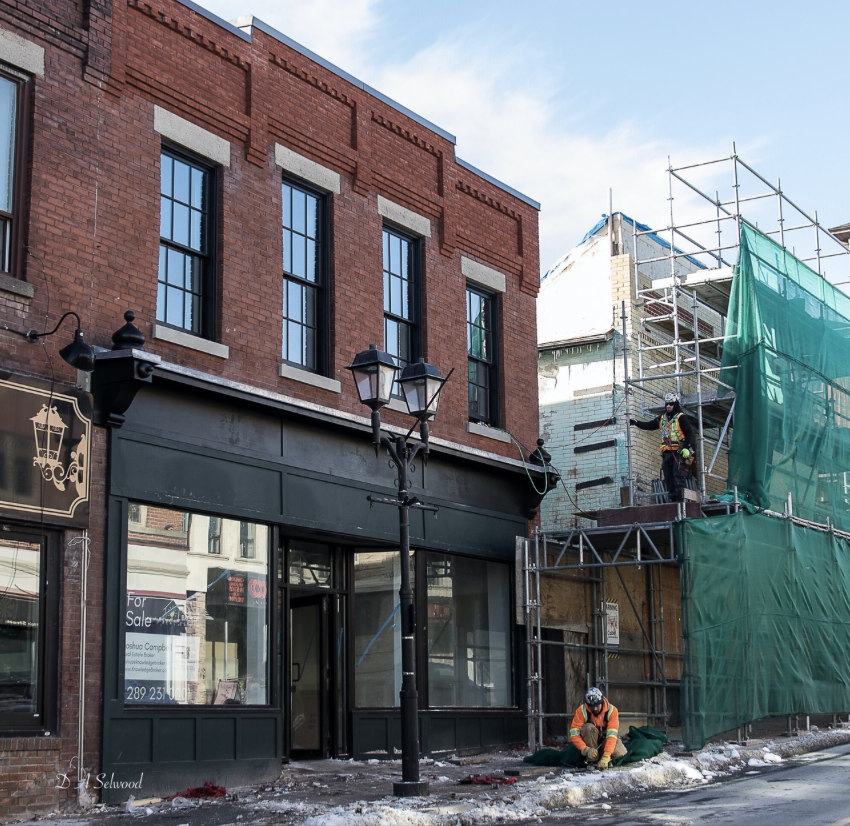 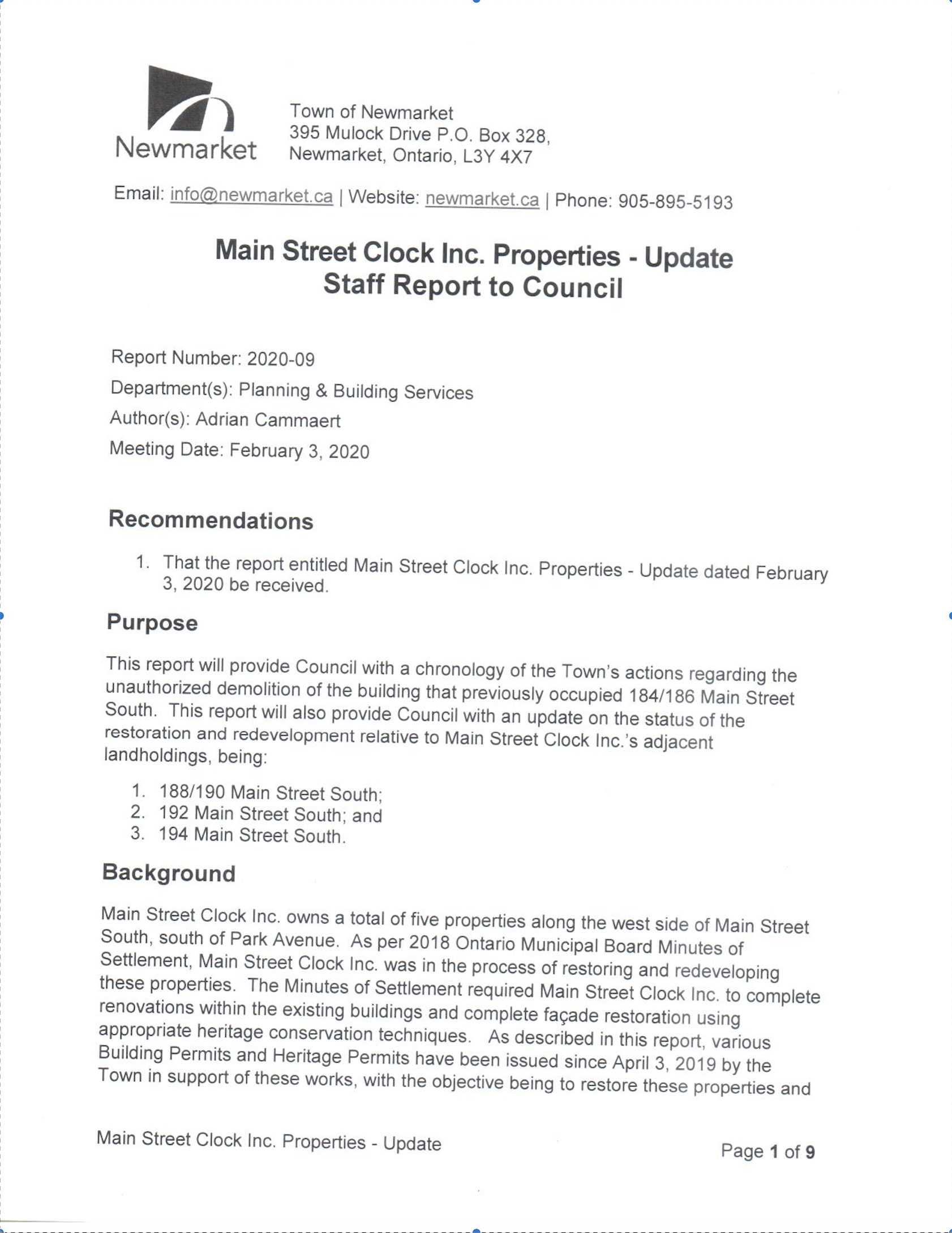 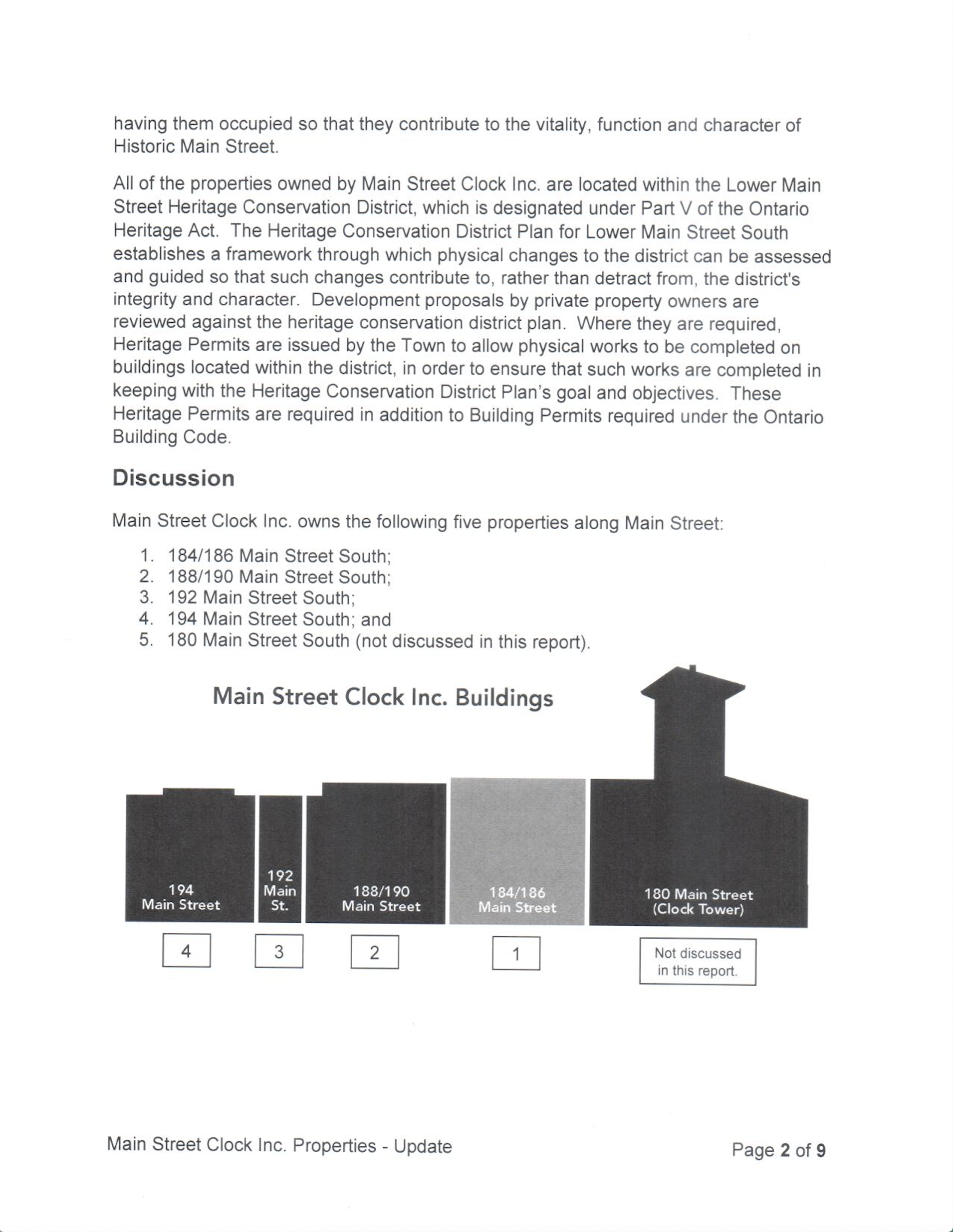 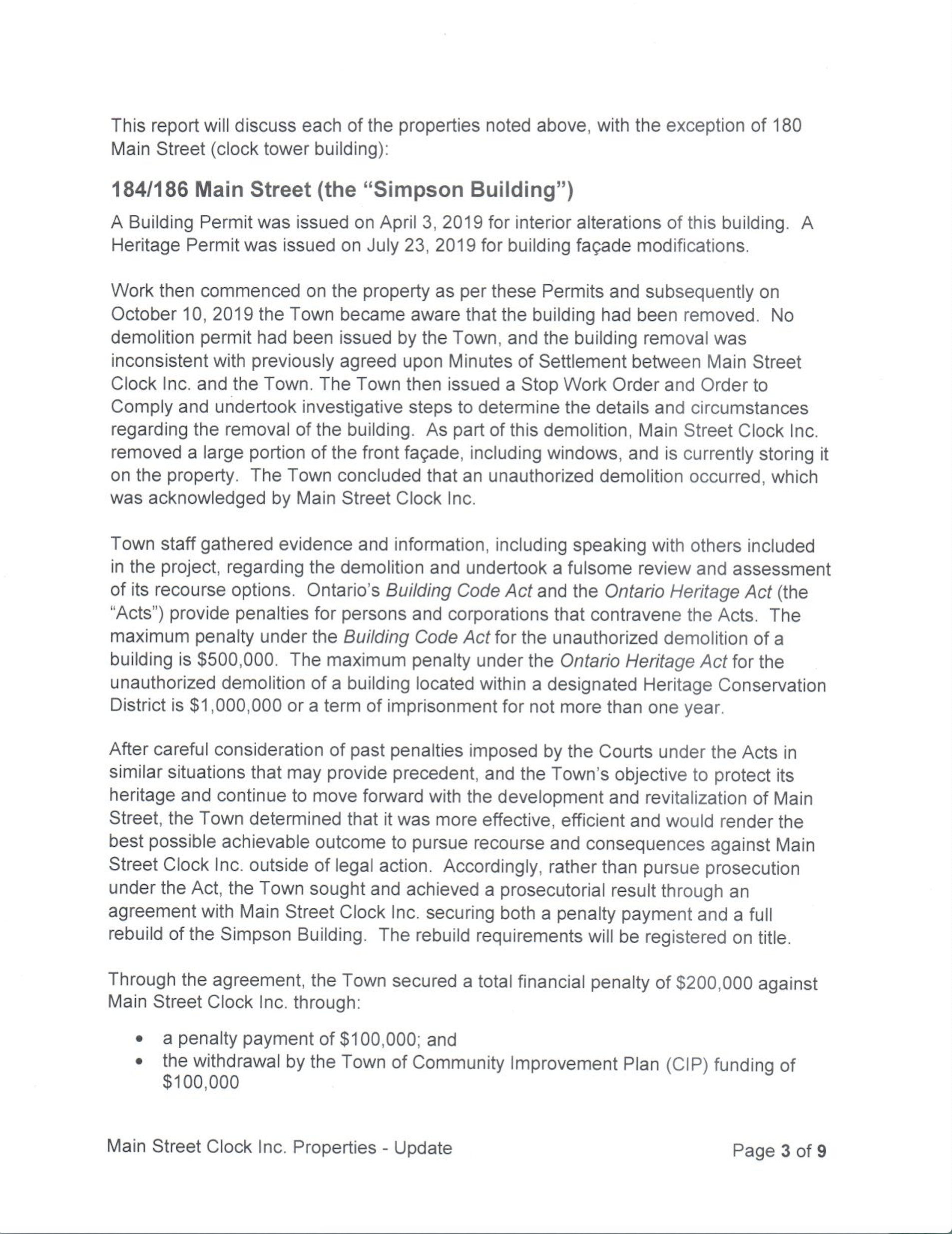 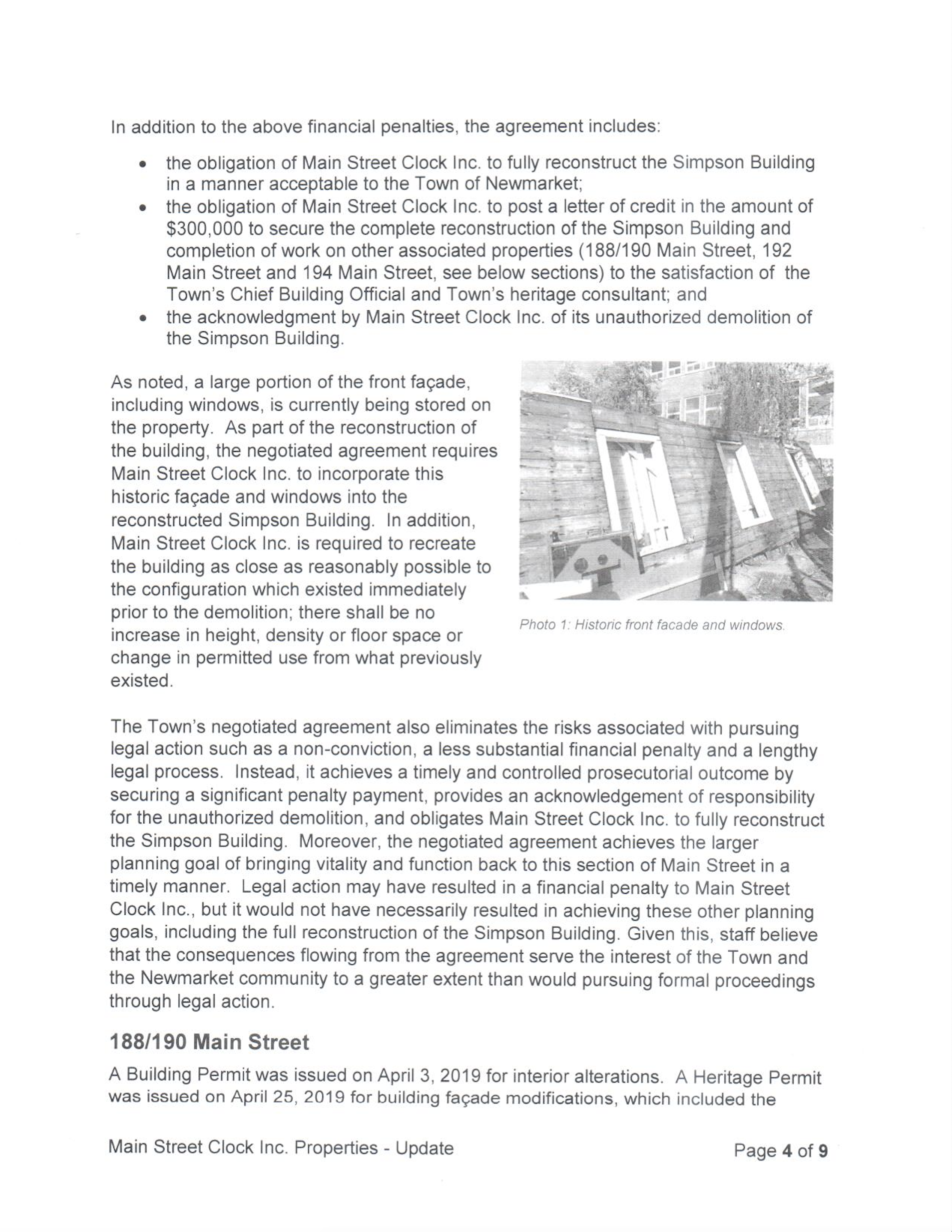 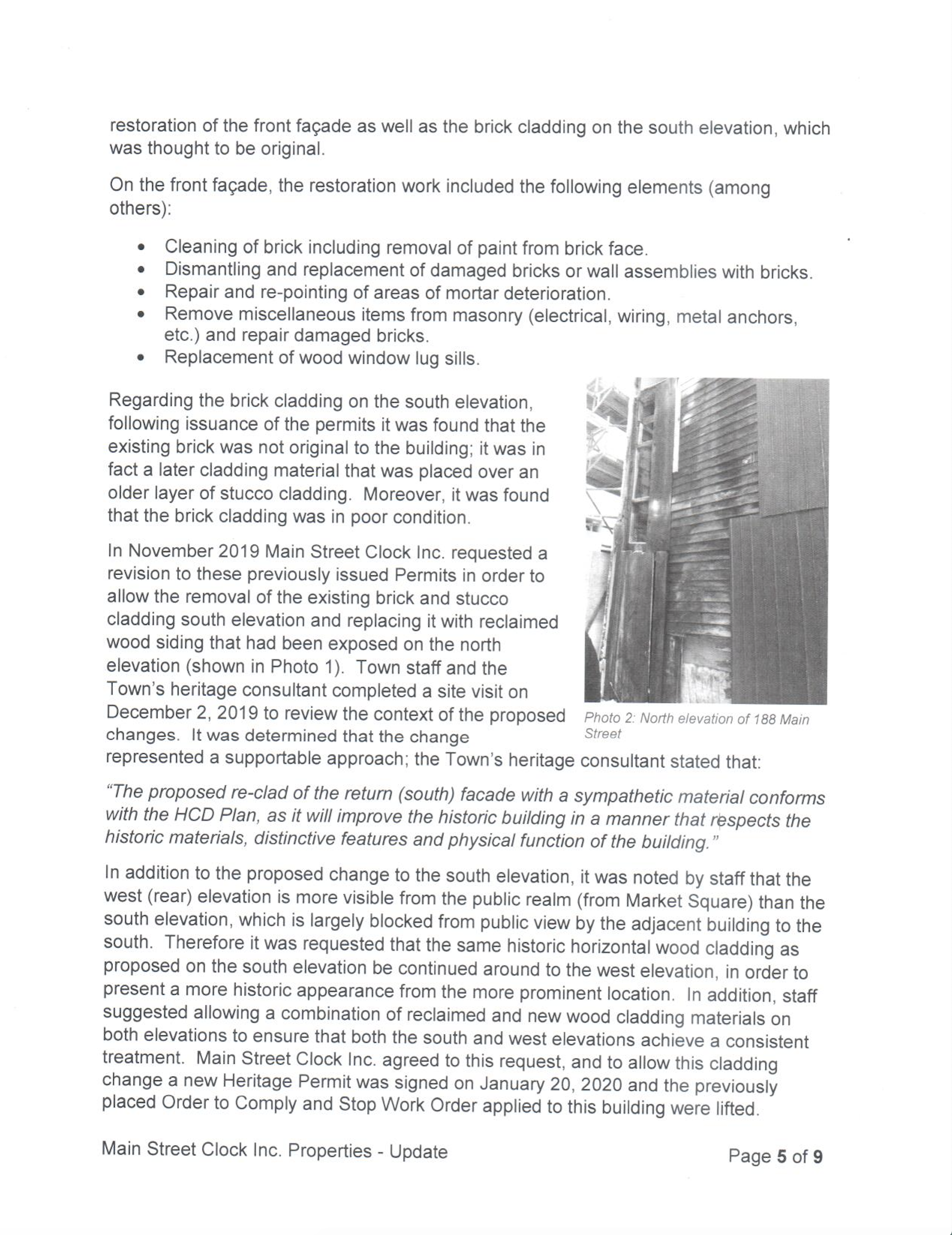 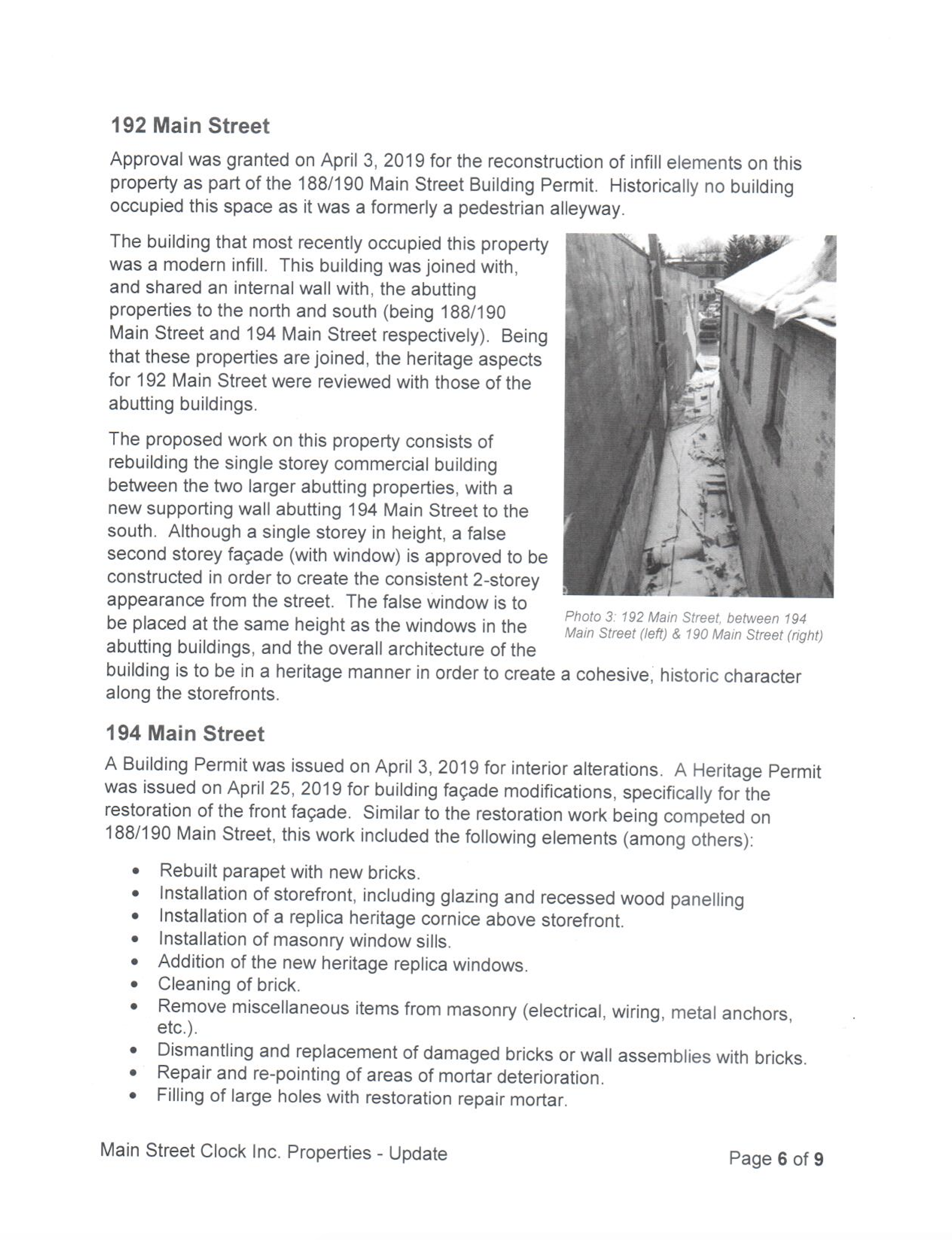 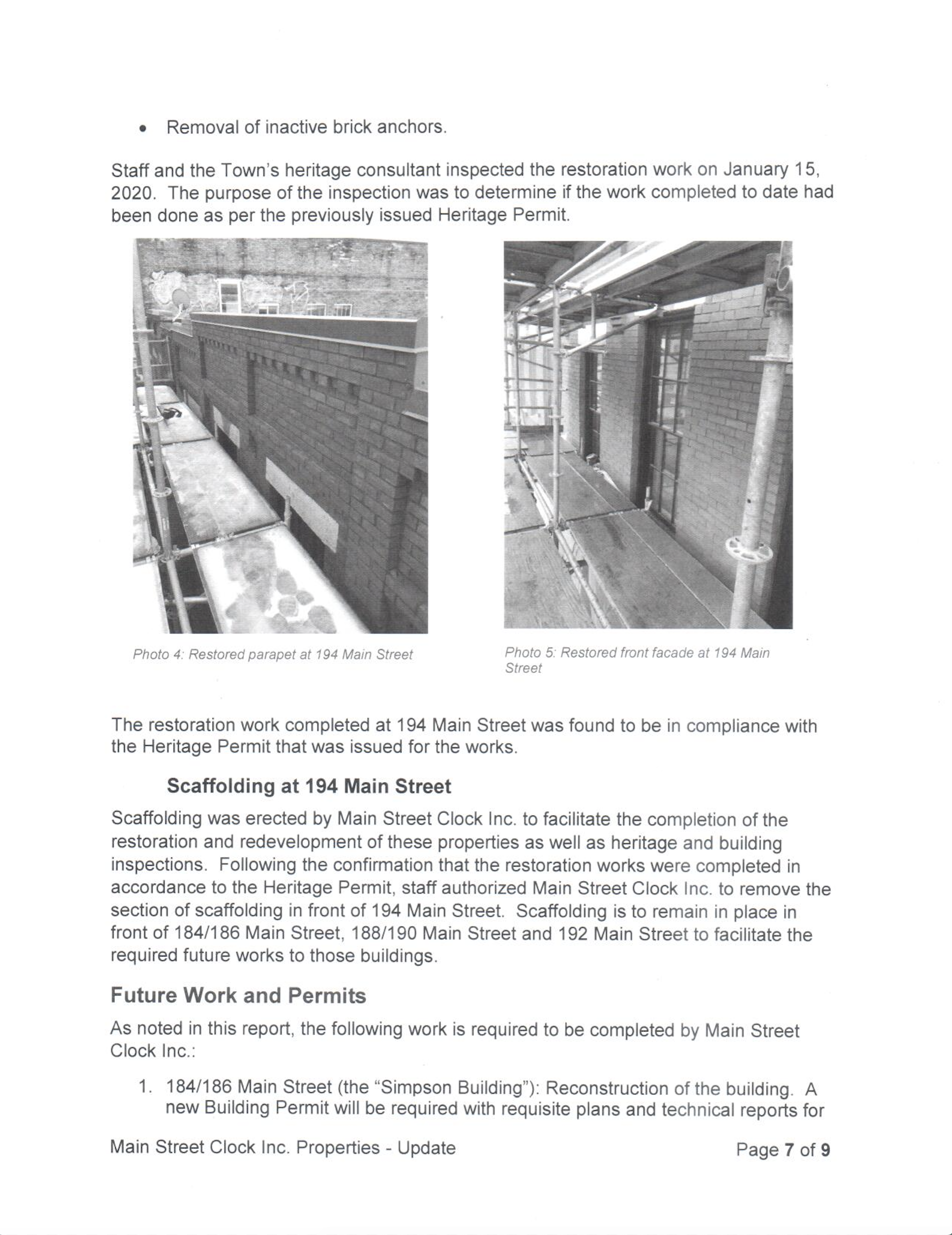 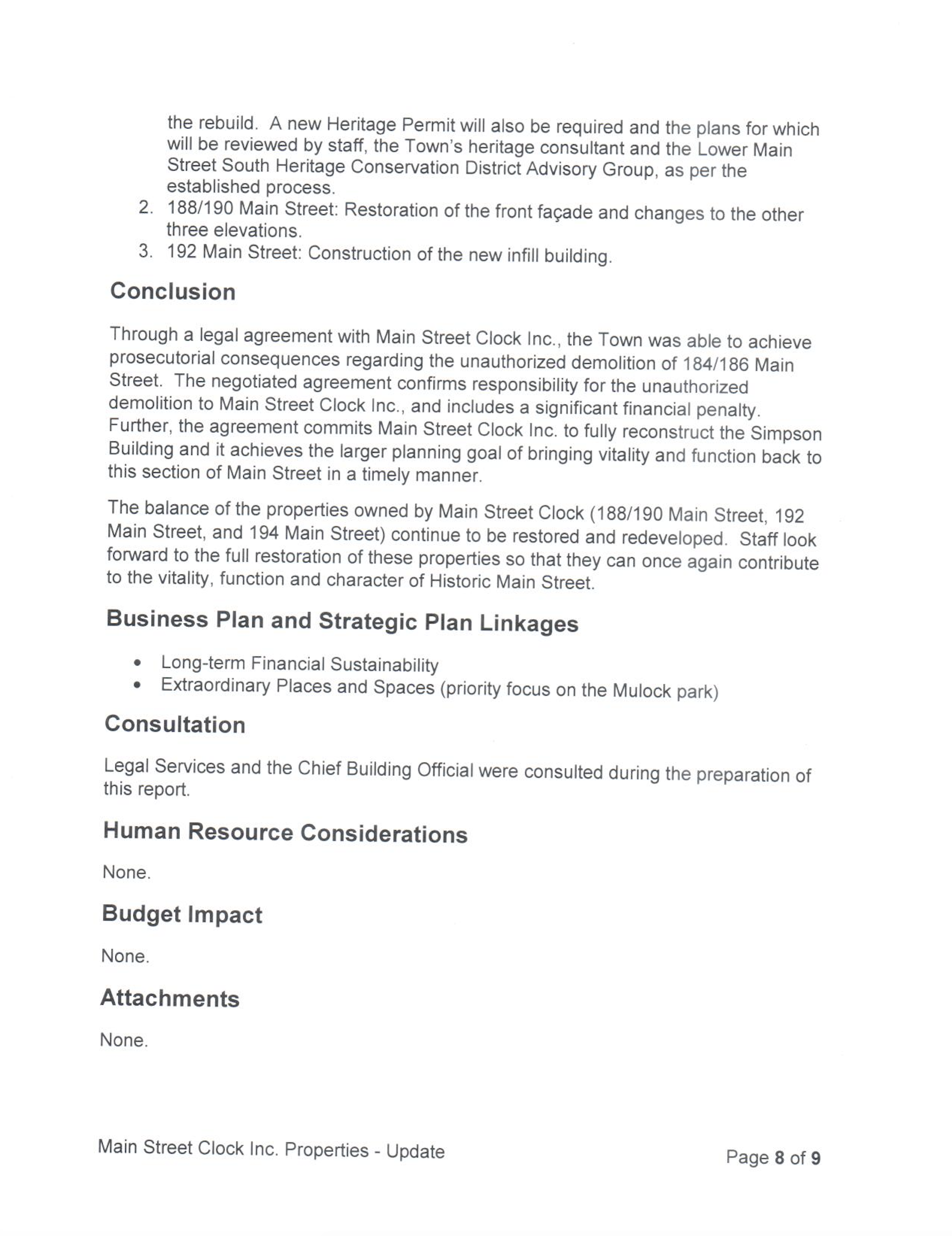 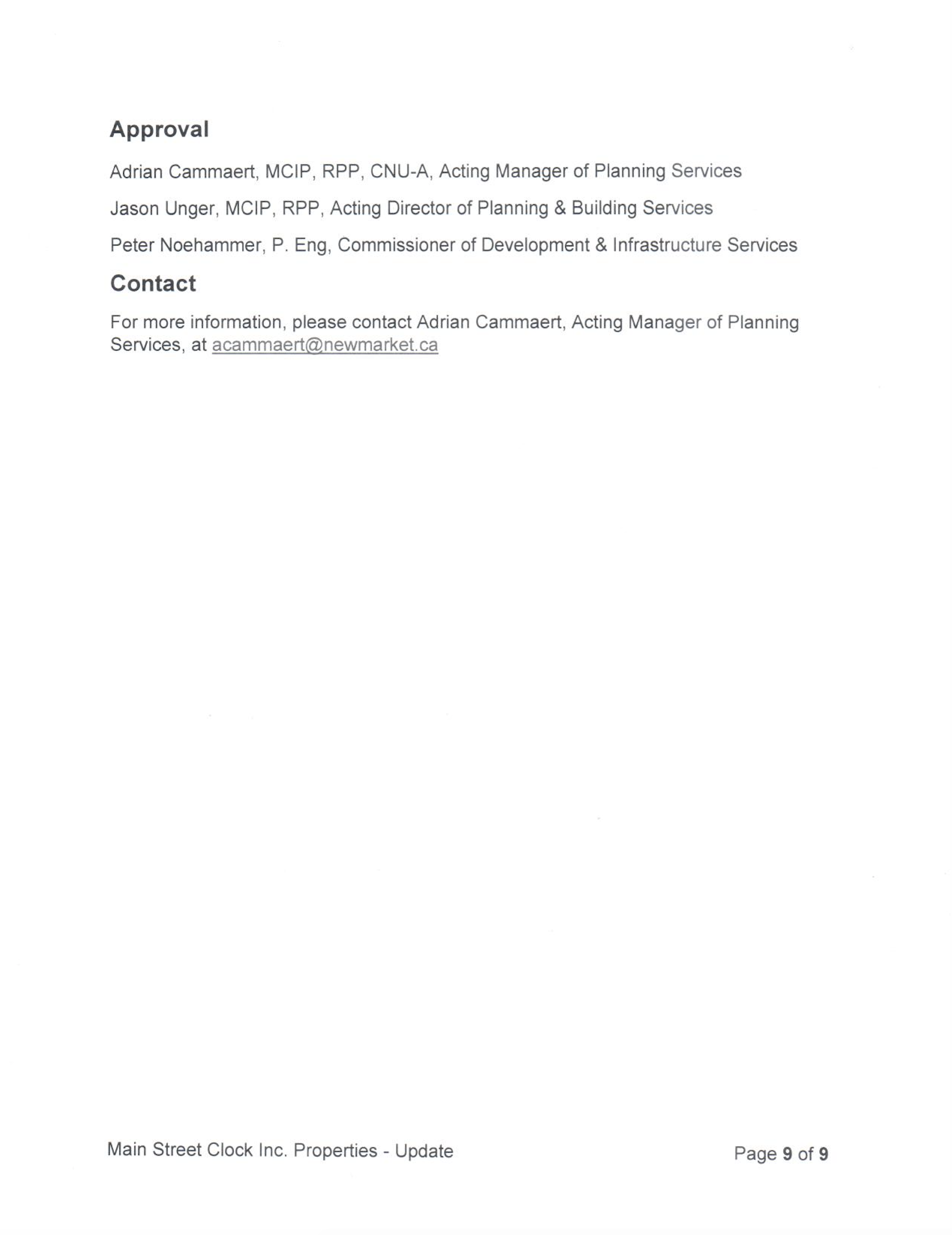